A long time ago, I'd had problems with Windows 2000 sound quality when intensive CPU or disk activity was taking place. This was solved by forcing Windows 2000 to use APM rather than ACPI.

However, it started happening again and this time I couldn't blame ACPI. I could easily create the problem by performing a large copy on my second hard drive. Running ProcessExplorer at the same time showed that interrupt handling was taking over 90% of the CPU. After more digging around with Google, it seemed that Windows was known for dropping to PIO mode, and leaving it there, after encountering errors on a drive.

Sure enough, when I checked the "Advanced Settings" under "Primary IDE Channel" Properties from the Windows Device Manager tree control, I could see that my second hard drive has been dropped to PIO mode. The quick fix is to uninstall the "Primary IDE Channel" and reboot. Windows will automatically reinstall the driver on re-boot and thence forget the PIO settings (unless, of course, your drive is really hosed). On re-boot, (well, after the second reboot as you have to reboot twice), both hard drives were back to Ultra DMA, as shown below. 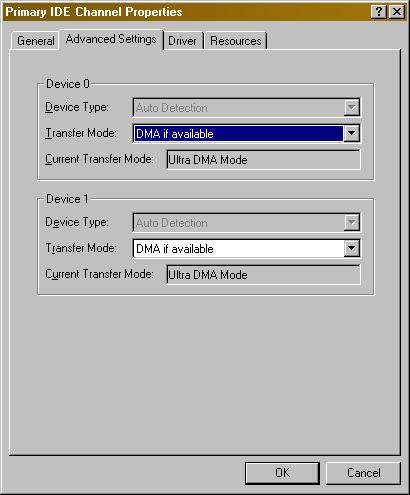 There is a hot fix to make Windows behave better. See the Microsoft support site.

I rather suspect that my previous fix of moving to APM was a sledge-hammer to crack a nut. Since all the drivers were re-installed, if a drive had dropped to PIO mode, it would have been corrected as a by-product of the ACPI to APM shift. What was that about "experience being a dear teacher"..