It's taken me a long time to get over my first exposure to Apple Macs. That was in the early 1990's, probably using a Mac SE (my memory is poor). However, I do remember being unimpressed with the OS and its reliability, although maybe that was due to using the Microsoft Office products on it.

Since then, it's been Windows and Linux/FreeBSD all the way. However, the introduction of Max OS X and particularly the MacBook Pro caught my eye. So, last month I acquired the smallest and nearly cheapest MacBook Pro (cheap is a relative term here); the one with a 13" screen but the faster 2.53GHz processor and 4GB of memory.

Here's a photo of the MacBook. Of course, it is far too valuable to be exposed to the excited photons of a flash, so I've had to leave it in the sleeve. Naturally, it can only be used in a darkened room and only touched when wearing cotton gloves. 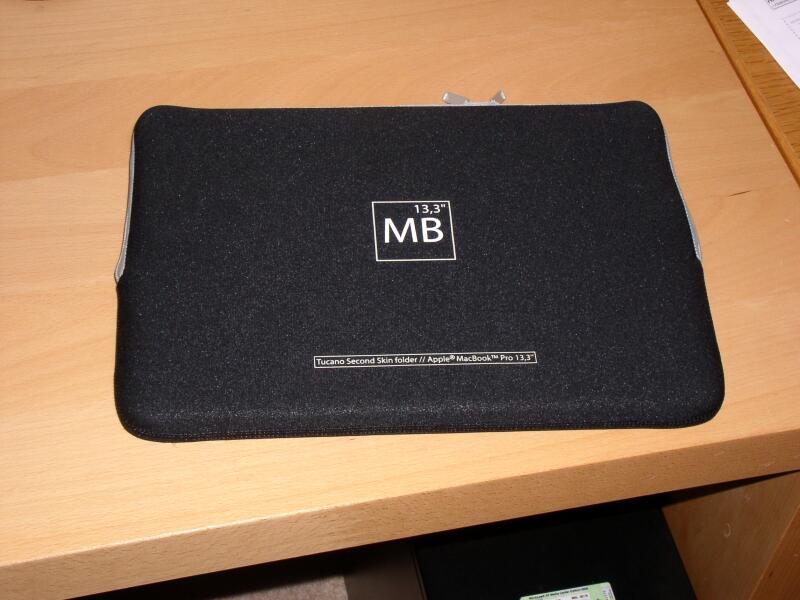 It has been a delight to use. A great GUI with UNIX under the hood, using FreeBSD userland. What more could you want? It comes with python, ruby, perl, even emacs. The provided emacs only supports terminal mode, so if you would like a version integrated with the GUI, use the Carbon Emacs or Cocoa Emacs ports.

There were, however, a couple of things that needed to be tweaked before I was completely satisfied...

In Snow Leopard (Max OS X 10.6.2), the host name can be set via the Sharing dialog under System Preferences. Simply enter your desired host name in the Computer Name text box.

The method outlined by Apple does not work in my version of 10.6.2. I followed the instructions, but there is no menu item to enable root password. Instead, I had to set the root password via the shell using the command sudo passwd root. You will be prompted to enter the password for the account you created when setting up the MacBook, and then you can enter a new password (with confirmation) for root.

To lock the screen, one way is to set up the screen saver to require a password to unlock immediately. I found that rather tedious to use, so as an alternative, invoke the utility Keychain Access. In the Preferences dialog, tick the "Show Status in Menu Bar". This will show a padlock icon in the menu bar. Clicking on the icon will provide a menu to allow immediate screen lock.

While I could print to my HP LaserJet 5N, via Samba on FreeBSD 7.2, I could not print to the Canon MP530 which is hosted on a Windows 7 machine. The spooler just sits in the Remote DownLevel Document state until the MacBook times out. Using the Gutenprint driver for a Canon PIXMA MP520, printing actually occurs. However, while monochrome is OK, colour is a mess. I'm still trying to figure out where the problem is.