My Macbook, bought in 2009, has become progressively slower with each new release of Max OS X. Every upgrade since Snow Leopard has been a triumph of hope over expectation. These include:

With Yosemite, the boot time to the login screen was around 60 seconds, and starting applications after login was glacial. I tried the simple stuff; defragmentation by copying the HD to an external drive and then copying back. Then I re-installed the OS. It made no difference (or sufficiently little that I could not tell the difference).

I figure that all the OS X developers have access to machines with SSD drives and petabytes of memory, and don't care about those of us with ye olde spinning platters. Something Had To Be Done. And that something was to install an SSD drive and to expand the memory from 4GB to 8GB. Both these operations are easily carried out on this Macbook Pro vintage.

The existing 250GB hard drive was replaced with a Samsung 2.5-Inch 250 GB 850 EVO SSD, and the replacement memory I bought from Crucial (naturallly, the existing 4GB had to be discarded - saviours of the planet, we are). Guides for the disk drive replacement are widely available on the internet; I used this one. The one tool I didn't have was the torx head screwdriver, required to undo the mounting lugs from the sides of the internal drive. Luckily, they responded to brute force from a pair of pliers.

The upgrade was successful; here's proof: 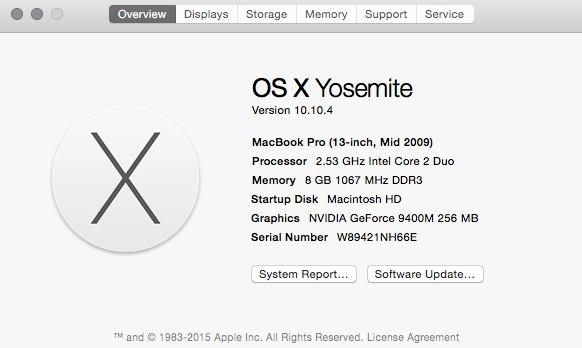 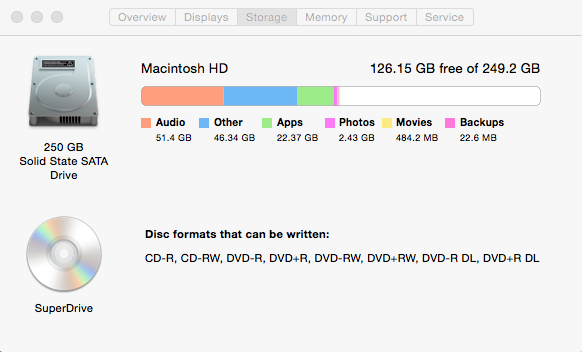 Boot time to the login screen is now a respectable 12 seconds and applications start quickly. It's like having a new machine.