How I broke the BBC

This is an example of one of those things you change, forget, and then it comes back to bite you later.

After reading about yet another Adobe Flash security hole, I decided to follow the herd and change the options in the Chrome browser to make the running of plug-ins "Click to Play". This is set in the Settings->Advanced->Content Settings->Plug-ins radio button dialog.

About a week later I tried to listen to BBC live radio via Chrome. It appeared to start to play, although there was no sound, and then a little while later, gave an error message: 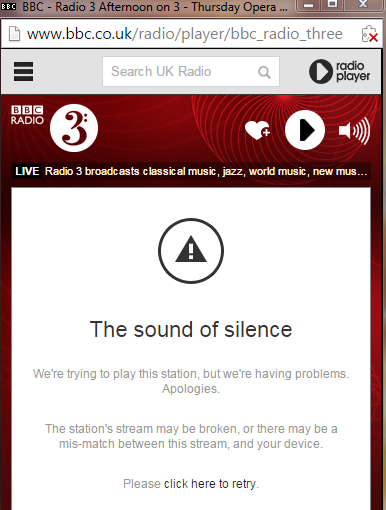 I figured an intermittent problem and ignored it. However, the same thing happened the following week, so I realised it was my problem, not the BBC's.

I found that "Listen Again" was working fine, but needed me to click to allow Flash to start... Ah! Luckily, Chrome allows the creation of exceptions to the general rules, so I added [*.]bbc.co.uk as an allowed exception for plug-ins and music returned.